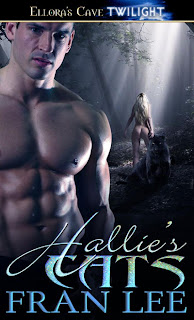 Hallie James loves cats—she just never realized she was one herself. Not until she met delicious leopard shifters Gar and Cal, one sinfully dark, one beautifully golden.
A terrifying meeting with a runaway pit bull lands her on her butt on the sidewalk. But when the dog’s owners appear out of nowhere, asking if she’s all right, Hallie has the most shocking reaction to their mouthwatering…scent!
Cat pheromones are powerful, and Gar and Cal’s attraction to the human is as instant as hers is to them. Hallie finds herself caught between two cats—hot and hard Gar, and his hot and delicious little brother Cal. When a gal is confronted with such a succulent choice, why not enjoy the fact that cats are not monogamous?

“You all right?” The quiet, deep voice was directly behind her. The unexpectedness of the question finished her. The milk exploded, drenching her in white, and she gave a shriek of shock, falling sideways onto the pitted sidewalk, her paralyzed body going suddenly limp. It felt as if her heart was going to explode like the damn milk! She knew the voice had come from the other side of the tall, wrought iron and stone wall, but the next thing she saw was a man bending over her, reaching out a hand to take her bags from her clenched hands.

What the hell? She blinked up at the man then back along the sidewalk. There was no gate except the one the dog had burst from, and that gate was over a hundred feet or more away. He would have had to climb or vault over the wall, and that, even for an athletic man, would take some doing.

“Sorry about Tigger. He isn’t dangerous but he can be pretty damn scary,” the deep, warm-honey voice murmured as she was relieved of her destroyed bag, then the intact one was lifted from her death grip. “Come on, and I’ll get you some towels.”

Hallie reached for the lean hand dangling in front of her face, and allowed the stranger to drag her up from her ignominious repose on the milk-splattered concrete. She patted herself down for possible injuries before she blinked up at him and rasped incredulously, “You call that…that…thing…Tigger?” Visions of a sweet boingy critter almost made her laugh.

It was then she saw him clearly for the first time, and she almost sat back down on the wet sidewalk again.

Stunning dark gold eyes in a face that dragged her breath away and held it captive, forcing her to fight for air. Odd eyes on a man whose hair was jet black. And after she managed to get past that face, her eyes slid down the long length of a body so utterly mouth-watering, she was sure she’d died and gone to Heaven. Because there wasn’t a man alive who could possibly look that frigging good in a ratty T-shirt and torn jeans.

Those gorgeous eyes looked so concerned, she barely managed to restrain her raging libido before she blurted out something completely unsuitable, like a squeal of delight as she tackled him and abused him terribly. She had the insane desire to lick him. Nibble him!

Yeah, he should be worried! Walking around unprotected from random female attackers who would love to get a piece of all that marvelous— Ooooh! Hallie dragged her milk-wet hand out of his and forced a shaky laugh.

“Did my steak survive, or am I gonna have to go back down the hill and catch that bus back to the supermarket?”

Dark brows drew together over those glinting topaz eyes, and his hand shot out to stop her from sagging sideways again. “You probably shouldn’t try to get up yet,” that delicious warm-honey voice said, somewhere just above her left ear.

Why the hell am I sinking again?

“No! I-I’m…fine,” were the last words out of her mouth before he tilted oddly and vanished from her sight. Whoa, she was back on the damn sidewalk again? Oh, there he was, leaning down and reaching to check her pulse. Why the hell was he bending over her again? Mmmm, she would love to reach up and drag his gorgeous body down to her level. And what the hell was he…

“You think she’s sick?” a quiet male voice asked somewhere beyond her line of sight.

“I think she got a good solid whiff of pheromones. She’s totally out of it. Here, you get the bags,” that lovely warm-honey voice murmured, and she was suddenly rising from the sidewalk, floating, and then she was nuzzling into a hard chest and inhaling the delicious, heady scent of the man with the golden eyes. Ooooh, he’s totally edible!

“That’s not normal, is it?” That quiet voice again.

“No. I think she’s sensitive to us for some reason. I feel like a fucking catnip mouse.” The warm-honey voice sounded irritated, but who cared, when he smelled so damn marvelous? 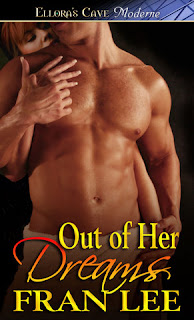 He’s a hot-headed, sex-on-the-hoof pro wrestler. He has a reputation for being the hottest, nastiest man on the mats. The fact that his face and body are plastered all over a bunch of mushy romance novels written by a woman with a death wish doesn’t sit well on those massive shoulders. His agent’s demanding monetary retribution from the woman who’s dared to use his image on her covers but he has another form of retribution in mind…and it has nothing to do with money.

She was his the moment he touched her. He came out of her dreams to claim her, and she wants every hot, throbbing inch of that delicious man.

He wants her, naked—at his mercy. One hot, orgasmic night wasn’t nearly enough. She ran, but he’s on the hunt—