I can see the light at the end of the tunnel... 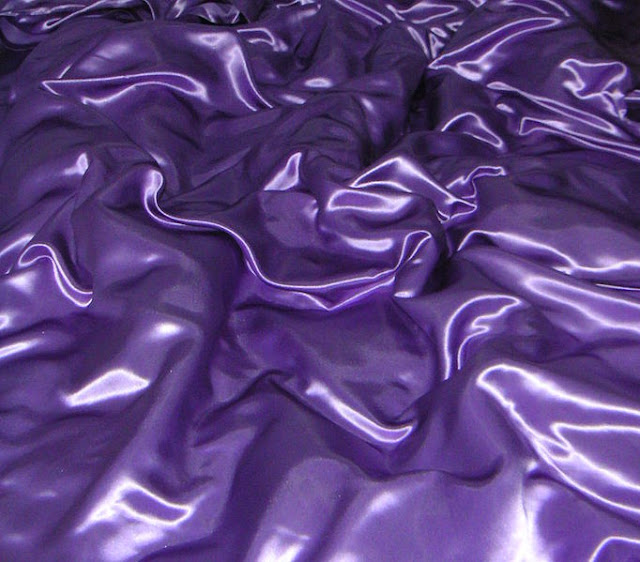 I took this picture of a man lying back on a hot purple satin bed...but when it came out, there was no guy...

So I am just gonna tell you that he was something else. Yum! Oh, well...now about that light I saw...I was dreaming and I saw a face from my past...WAY past...like when I was 12. It was a guy I had a wild crush on. A hot, delicious NA guy who was my hero back then.

He ran a big herd of mustangs, and he let me ride them when they came into town to munch on people's gardens, lawns, and lilacs.  Now, needless to say, I was about the only one who liked those horses, so the man sort of liked me.  I would give him a call on our brand new three-party-line phone (after waiting for everyone else to finish, of course)  and let him know where the horses were before the sheriff got a call.  He would come out in his pickup and turn the sheep dogs loose and they would send them off home pronto. And I would always get a free ride.

Well, anyway...I grew up and he moved on to a new spot where the horses would be able to graze, and his sheep would not rove into cattleman's pastures...but I never forgot that tall, lean, long-haired guy. Yum.  I decided to write him into a new story.  So wish me luck...I have a week left to finish the wip and sub it.

It's on sale now! 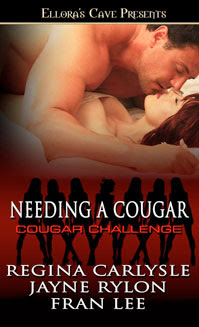 Needing A Cougar
Available now at Ellora's Cave
Drilled by Regina Carlysle
Lori Donovan accepts the Cougar Challenge and pledges to snag a hot young stud, knowing it’ll be tough once she moves back to her Texas hometown. She expects barren plains and rattlesnakes but finds hunky Jackson Blue drilling for oil on her property instead. A driller. Hmm. Lori has a few ideas about that and just about all of them involve her poor, needy,  sex-starved body.
Jackson takes one look at the curvy, sexy, older woman and puts his expertise into action. After all, drilling is what he does best. Against the wall, on the floor or in the middle of her bed, he’s the right man for the job. It’s a hot time in Texas when a tough, sexy drillin’ man meets a sassy cougar, and playing it safe just isn’t an option.
Driven by Jayne Rylon
Lynn Madison transformed from repressed corporate drone to bold seductress overnight when her online friends at Tempt the Cougar encouraged her to take charge of her destiny. Their advice haunts her as she drools over the hottest Italian stallion on the planet while stranded in an airport.
Sebastian Fiori is a master of speed. A rally car driver, he’s used to winning on and off the track. He sees no need to put on the brakes when a sexy sophisticate revs his engine. After spotting Lynn’s decadent ménage novel, he decides to take her for the ride of a lifetime—with his navigator Mark.
Storm delays would be far more upsetting if Lynn’s young stud wasn’t offering a first-class ticket to indulge her fantasy. Neither of them expects their rendezvous to last beyond their transatlantic flight on his private jet. But sometimes there’s no escaping the forces of nature.
Reader Advisory: Novel offers a racy little treat—an m/f/m ménage.
Nothing but Sex by Fran Lee
Lee Blackhorse is hardly Cougar material, no matter what her friends over at Tempt the Cougar say. A forty-two-year-old woman who lusts after her thirty-year-old weekend helper is just plain nuts. Or is she? Mike Running Elk is the sexiest thing ever to don tight jeans and a second-skin t-shirt. She’s secretly yearned for the man for years.
Mike has no problem seeing himself in the role of Lee’s lover. In fact, if he can just get the hot-as-hell woman to realize he’s plenty old enough to ring her bells, he plans to do more than just clean her barn and mow her grass. He’s waited for her long enough.
When Mike shows up at her door with an injured hand, he notices Lee can’t pull her eyes off his naked, ripped chest. Mike can’t believe she’s as oblivious as she acts. The ice has been broken and he intends to heat things up even more…
Reader Advisory: Our poor heroine endures some mild violence, but don’t worry—the hero’s got her back.
Posted by Fran Lee at 4:43 PM 2 comments:

I want to sing this woman's praises... 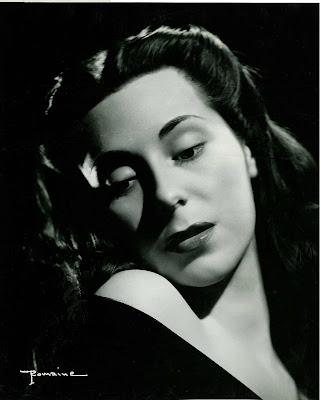 Meet Melva Niles Barborka...
Better known as Melva Niles back in the days when she sang on Broadway, off Broadway, on the radio, and for the President at the National Theater in Washington DC.  Melva Niles was one of the fastest rising stars of musical theater in the mid to late 40's...and then she gave it all up to walk away and be a wife and mother. 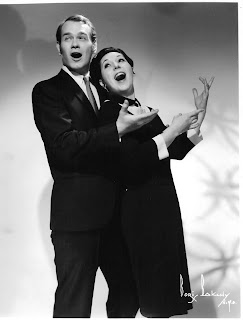 Melva sang on stage with some of the greatest male leads in the business...including her "The Railroad Hour" performance of The Song Of Norway on February 28, 1949 on ABC Radio, with the show's charismatic host, Gordon MacRae. When she was singing in the nation's capitol, Mrs. Truman and the President's daughter were so impressed by her that they insisted Harry invite her to the House for lunch.
How on earth did I get to meet this person, and to call her friend?  Well, obviously she is not into karate.  And truth to tell, she blushes every time I tell her the kind of books I write.  Actually, I met Melva a number of years ago when she was doing a part time job in my office.  I was fairly close friends at work with Melva's daughter-in-law, who just happened to mention that her m-i-l was starting work there the next week under a special program that allowed aged low income folks to work a few hours a day for the government to help make ends meet.
Melva was celebrating her 80th birthday that fall. She was a sweet, unassuming lady who blushed easily and laughed at every problem. So when her d-i-l happened to mention in passing that Melva had once been a star of the stage and Broadway, I did what I always do...I got curious.  Why had I never heard of this once-famous and now destitute person?
I Googled her. I found several blurbs on the Internet about shows she had been in, but after a meteoric rise to stardom for three years, she suddenly seemed to vanish. I found her recorded performance of the Song of Norway on ABC Radio, and purchased it for her as a birthday gift.  Seems she found the man of her dreams, married him.  Two years later, she got pregnant, and quit a multimillion dollar career to be a wife and mother.  Now, that is what I call determination and courage.
Melva is another of my personal heroes.  She continued to do special performances for a number of years after leaving Broadway...but she did them for her church, and made not a dime off anything. Her records are being sold everywhere, but this little lady receives not a red cent. She found faith in a world of glitz and money.  She and her husband lost everything that most people find important...money, cars, a high flying social life...and when her wonderful love became ill, she found herself a widow.  But her courage and determination taught me a great deal, and I will always treasure our friendship.

Melva is a bright star in the Heaven of heroes.  She is now 85, and still singing.

Fran Lee
http://www.franleeromance.com
Posted by Fran Lee at 1:01 AM 7 comments:

I am going to hire a person to kick my butt when I stop working... 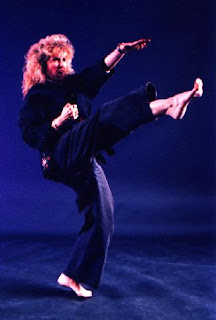 And this lady certainly can kick butt...

Meet an old pal of mine from my karate days...Jeanette Wilde Anderson. These days, Jeanette sells home-made crocheted items and Avon...plus she still works as a product demonstrator at Costco.  Does she still do Tai Chi and Kenpo? Sometimes, for the exercise. But like me, she values her bones and her brains...either of which can get messed up if a student kicks you in the wrong place.

Jeanette and I traveled for years to various tournaments around the country, winning trophies and enjoying the camaraderie of meeting new people and maintaining old ties. We taught together in her school for years, and then we just...stopped.  You know how stuff can get to you? How things you truly loved doing can just sorta slip into the limbo where you can't seem to reach them anymore, but where you can recall everything that you achieved?

This week is my week to give tribute to special friends I have treasured over the years...lauding their contributions to my life and to the lives of others they have touched.  Can you believe that the woman above is turning 70 this year? That she still looks about 45? Of course, I hate her. KIDDING!

This woman in one of my heroes. She showed me that starting martial arts at the ripe old age of 45 is not a frivolous thing...nor is it impossible.  Jeanette also began her martial arts career at 45, and was a brown belt when I began also at age 45.  She tested for her black belt and received it shortly after I got my Orange belt (I moved up fast...being old, I didn't want to waste precious time). I was amazed that this tiny person (about 5 feet tall) could actually take down a man who stood 6 feet and weighed over 200 pounds. She was my bright beacon in the frightening darkness of a newly-divorced woman doing all the things she couldn't do while she was married.

I have always revered women who could manage to survive and do it very well in a man's world.  Jeanette was one of those women.  It has been an honor and a pleasure to call her my friend.

Come back again for my next tribute to a special friend...