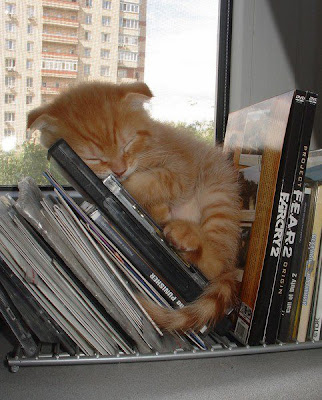 I feel lazy today, but I have things to do and places to be...

So it's time for me to get off this computer and fix the frog-eye salad and the ham. But before I do, I want to ask you what YOUR favorite Thanksgiving dishes are. Do you love the old faithful turkey and dressing and cranberry sauce? Or do you go for Ham and mashed? I have switched back and forth several times, to voluble complaints from those who wanted one or the other. So now I fix both ham and turkey, and let them choose their meal.

Because my house is too small to hold so many people, we have dinner at my son's home. I left the 10-pound turkey breast with my son last night, along with the taters and the big crescent rolls and the Martinelli's Sparkling Cider (I don't buy wine anymore because it makes the gathering shaky at best) and I will heat the spiral sliced ham and make the dressing, the frog-eye salad, and the candied yams. They love my recipe for the salad, dressing and yams.

I watched my mom slave over those damn yams year after year, and I detested them. Cooking great big huge yams from scratch was a total pain. You could never get the stringy things out of them. And using brown sugar is great, but brown sugar and marshmallows don't give the deepest flavor. Yep, they are sweet, but something was always "missing".

So I decided to experiment. Why spend three hours boiling, baking, or steaming those yams when there are some wonderful canned sweet potatoes available in the store?  I buy a couple of large cans, drain them, and arrange them in the bottom of a glass casserole dish. Then I dot butter over the surface and add light brown sugar to cover the yams. I sprinkle walnut halves over that, then cover the whole thing with tiny marshmallows. Then I drizzle heavy cream over the top (not a lot, because it makes the yams too wet).

Pop into the microwave (or oven if you have time) until the goo on top is melty and bubbly. Then allow to cool on the table before spooning out. The yams will be resting in a nice golden caramel cream sauce and the nuts add warmth and crunch. As the sauce cools it thickens up.

And my dressing is never made in the bird anymore. I use the turkey drippings and chicken base and I use cornbread mixed with the traditional crouton type stuffing pieces. I saute finely chopped onions with finely chopped fresh celery, using one full cube of real butter. I add the poultry stock and stir, then add a cup of slivered almonds. I add sage and seasonings to taste, then I pour the stock mixture over the bread crumbs. I mix by hand until it is well soaked, and then I spoon the dressing into a baking bag, and pop it into the oven for about two hours (or the microwave for about 18 minutes).

Another thing I sometimes add to the dressing before baking is sliced mushroom caps. I buy the small ones. The kids don't like those as much as the nuts, so I often split a batch.

Hope your Thanksgiving is good.  Let me know what your favorite recipes are.

What are your holiday traditions? 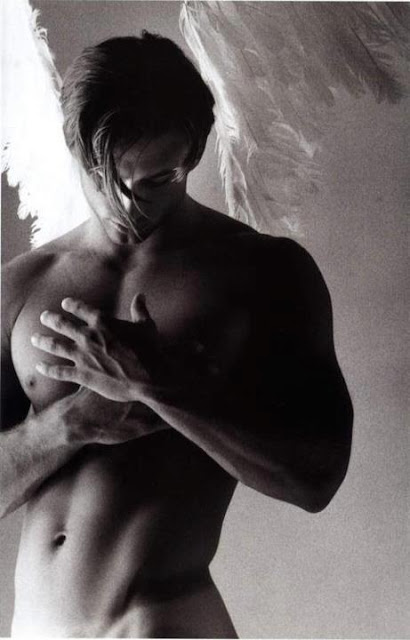 I think of Angels and creches and friends and family. Well...the angel above is not quite the angel that I usually think of for the holidays, but let's just say I am thankful that I still have a healthy libido.

I love the holidays of the year, including birthdays, because birthdays, after all, are the most personal of holidays.

I love the end of year holidays the most because they reflect on the beauty of life and the return of light to a darkening world. While the end of the year signals the shortest amount of daylight and the longest nights, it encourages us to reflect on the warmth of a crackling fire...the beauty of a snowy night with the moon brightening the landscape...the sound of carols and the beauty of stars glittering in clean, cold, windswept skies.

Halloween is the first of the year-end holidays. The time of the year when heaven (and hell) are closest to our plane of existence. Traditionally the night of the dead, when spirits seeking solace (or mayhem) return to earth to attempt to contact those who live on in abandon, unaware of the closeness of the other worlds. Modern humans follow ancient traditions without the foggiest notion of what they are commemorating.

Humans have long associated darkness with evil. Samhain was the traditional beginning of the "dark" months of the year. Samhain is a Druidic/Celtic observance that has far more meaning than our modern Halloween. However, All Hallow's Eve (the Christian All Souls Day) blended seamlessly into the Christian All-Saint's Day, when the faithful departed who had reached Heaven were asked to pray for the souls of those who didn't quite make it to Heaven, and those who remain locked to the earth until the end of life.

Today I am talking about Halloween.

When I was a child, we trick or treated everywhere without adult supervision. People broke full candy bars into pieces and we gobbled them as we walked. We got so sick on candy we threw up by the time we got home. Mom threw away most of the rest, except for the pieces she ate herself. We got popcorn balls, candied apples, and coconut marshmallows. Nobody worried about any of the stuff being tampered with.

When my kids were little, I helped them get ready for trick or treating by helping them with garish, scary disguises and ghoulish makeup. I dutifully ordered them not to eat any candy that was not securely wrapped. No popcorn balls or candied apples. I also warned them not to eat any of the fruit until I had inspected it. I sent one of the adults in the family around with the kids to make sure they were safe in their travels. And when they got home, we divvied up the candy to make certain it was safe to consume. A lot of it got trashed.

As the candy-giver at home, I always bought candy that could not easily be adulterated with cyanide or needles. I gave out wrapped Tootsie Pops, taffy in wrappers, Bottle Caps, Twizzlers in cellophane, etc.  And I told the children who came trick or treating stories about the old fashioned Halloween celebrations where people didn't go treat or treating, but had big parties where everyone was safe and drank cider and bobbed for apples. I told them that the costumes they love to wear were derived from older traditions. And every year, fewer kids would come to my door.

I guess the story got around that they would have to learn something before they got that little piece of candy. LOL!

How do you celebrate Halloween?

Thanksgiving is coming up next.  Be prepared.

The year end holidays are rushing upon us...are YOU ready? 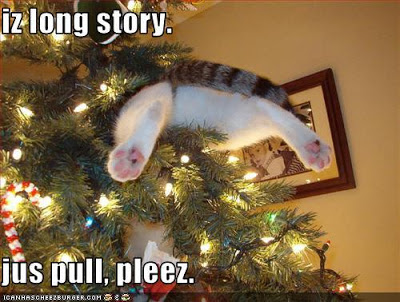 Many people feel pressured into jumping into the holidays headfirst...

Christmas ads and store promos start the minute Halloween is over, and they continue until New Year's Day. Some of us tend to feel sorta like this poor little treed cat...stuck in the Christmas rush and unable to get back out. But I tend to ignore the invitations to shop 'til I drop, and get into the spirit of the season.

The WalMart I shop at had its Tree and Ornament department up and running in mid-October.  I went in yesterday and found a sparse Thanksgiving aisle next to the 80% off Halloween aisle. Since I don't "do" Halloween (having no small kids to buy for) I picked up a couple of nice things from the Thanksgiving display, and continued my shopping.

Once my kids were old enough to understand that Christmas was a commemoration of Jesus' birth instead of Santa's run around the world, I became quite eclectic in my holiday traditions. I have friends who celebrate year-end holidays in different ways, and I simply adjusted my holiday decor to include the wonderful myriad of traditions I saw when I visited their homes.

Even Thanksgiving changed for me, since I tossed out many of the traditional concepts of Thanksgiving and exchanged them for more realistic stuff. I grew up around Native Americans, and listened to their stories and legends. My 4th grade teacher was a beautiful lady whose lineage included Onandaga and Seneca. She read us wonderful stories about Native American mythology and real NA people like Crazy Horse and Sitting Bull and Chief Joseph.

She also talked about the "first Thanksgiving", and how the "story" has evolved over the centuries. A day of thanksgiving was common in the colonies, and often was to give thanks for a good harvest or for winning battles. The particular thanksgiving that is interlaced into our legends and stories appears to be the specific one in Plymouth Colony in 1621. It stood out from the others because it was a "shared" feast.

The Plymouth colonists had just enjoyed their first successful harvest in the new world. They had harvested the crops they had planted. As they prepared a feast to give thanks for their good crops, they received an unexpected visit from the the great Sachem Massasoit. Massasoit had walked for two days with his wife and 90 of his warriors to visit the colonists and the tribe provided wild turkey, squash and bushels of corn. The Wampanoag hunted so that the colonists had enough wild game for their feast, so the colonists decided to invite them to share the feast.

My grandkids were told the story a bit differently. Namely, the starving Indians needed help so the magnanimous colonists gave them food.

No matter how it came about, it would not have been such a great harvest had the colonists not learned how to fertilize their crops and plant different vegetables from the thankfully friendly tribes they found in their new homes.


When I was a kid, we always had a huge turkey with stuffing, mashed potatoes and gravy, cranberry sauce, celery sticks filled with soft cheese or peanut butter, all kinds of veggies, fruit salads, green salads, and then pumpkin pie with fresh whipped cream. And everyone ate waaay too much. The turkey coma kicked in, and everyone just sat around gabbing for a couple of hours, then went back to the table and ate some more.


The food was ready at about 2:00 in the afternoon, and sat out on the table for the rest of the day. I know that I got pretty sick after the third time to the table...because no one seemed to understand that leaving warm food out for that length of time often gave kids or old folks food poisoning.


So, after I grew up and had my own thanksgiving dinners, I changed the status quo...dinner was set on the table at the normal dinner time, we ate, and then I would immediately start to pack the warm food into baggies or Tupperware or old cottage cheese containers and put it away in the fridge. If anyone wanted more, they had to get it out and eat it cold, or heat it up again.  There has not been a single case of food poisoning in my house since I started doing that.


Also, I changed the whole ball game when I decided to make homemade Tex-mex enchiladas for Thanksgiving one year. It was great! We ate everything...no leftovers.